To get a copy of the magazine or to distribute it in your area, please contact us.

Editorial: Thank God I'm A British Muslim!
Some would say we're treated as 2nd class citizens. We're demonised by the media. There are calls for the Niqab to be banned. All Muslims are seen as potential terrorists. Others would add that Muslims have to prove they are not the 'enemy within'. Some would even go as far as saying that Muslims have to prove they are 'British first, Muslims second'. The above doesn't paint a pretty picture now does it? On the flip side I suppose that's how most Muslims are, or can be expected to be, treated in most non-Muslim countries in the current environment, especially post 9/11, 7/7 and the rise of the suicide bomb worldwide. The Challenges Now apart from the dodgy weather letâ€™s see what the real challenges are for British Muslims living in the UK... Islamophobia

Adam & Eve In The Quran
Does the Quran also tell the story of Adam and Eve? Yes it does, although a different version to the one that appears in the Bible today. The story of Adam (pbuh) and Eve is known the world over and is used by some to explain how mankindâ€™s existence began on earth. In fact, Christianity, Islam and Judaism all teach that Adam (pbuh) and Eve were the first humans created by God and that all humans have descended from them. Adam (pbuh) is also a prophet in Islam. So Muslims believe that every human being in the world today is related to Adam? 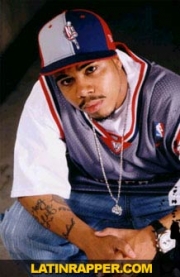 Life Of An Outlaw - Exclusive Interview with Napoleon
Born and raised on the mean streets of New Jersey, Mutah Wassin Shabazz Beale was only 3 years old when his Muslim parents were murdered in front of him. Brought up by his grandmother he followed in the footsteps of his cousin and older brother and took to selling drugs out on the streets to earn a living. After getting arrested on his first day out on the block he decided to try and find another hustle, another way to make money, so he turned to writing raps. After travelling to L.A. he was introduced to Tupac Shakur who asked him to join his rap group Outlawz as â€˜Napoleonâ€™. Alongside the other Outlawz - which included Kadafi, Kastro, EDI and Hussein - Napoleon appeared on over 40 million records sold worldwide.

Q & A. Praying Jummah
Q. What is the ruling on reading Jummah when you're at work because depending on your job/employer itâ€™s not always possible to read Jummah Salah in this country? So what should one do? A. In the name of Allah the Most Beneficent and Merciful. Jummah prayer is only an obligation if it fits the following six qualifiers: An Islamic State or ruler (sultan) has allowed the Jummah to be prayed. It has to be a city or town where the Jummah is to be prayed (i.e. not a village). It must be prayed during Dhuhr time on a Friday. It must be prayed in congregation with a minimum of 1 Imam and 3 followers. (According to the Shafi'i Madhab it must be 40 followers as a minimum.)

Q & A. Missing The Jummah Khutba
Q. If someone misses the Khutba, but makes the Jama'ah, is the Jummah prayer still valid or should the person then pray Dhuhr to make up? A. In the name of Allah the Most Beneficent and Merciful. The Khutba is an obligation for the Jummah prayer to be valid. However, it is not an obligation for the person attending Jummah to have taken part in the Khutba.

Q & A. Making Wudu At Work
Q. I have a room to pray at work but no particular Wudhu (ablution) facilities. I don't feel comfortable washing my feet in the sink or in the toilets at work because I look silly and plus my non-Muslim colleagues look at me funny and say its unhygienic, so what should I do? A. In the name of Allah the most Beneficent and Merciful.

Issue 15: Ali & Jamal
Jamal comes out of the mosque after reading the Jummah prayer. A brother shoves an Islamic leaflet in his hand, as Jamal is about to thank the brother in the Jubbah (long thorbe) he almost dies of a heart attack... Jamal: Sal... Salâ€¦ Salaam Bro. Is thatâ€¦ is that you Ali?! Ali: You spotted me Jam. How are you bro? Jamal: Iâ€™m fine brother. Are you... sure thatâ€™s you Aliâ€¦ Ali: The one and only. You look like you gonna pass out Jamâ€¦ I think you better sit down. Jamal: Iâ€™m just a bit shockedâ€¦ You look so differentâ€¦ what happened?! Ali: What can I say Jam... I found God. Jamal: Where?! I didnâ€™t realise God was lost? 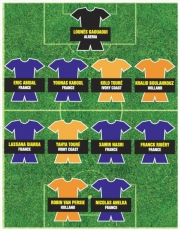 WORLD CUP 2010: Fantasy Football - Muslim Style!
There will be no shortage of world class players in South Africa and a lot of them will have one thing in common - the faith of Islam! France and Bayern Munichâ€™s Franck Bilal RibÃ©ry is the standout performer who could make World Cup glory possible for the French. An attacking forward, he has the pace and the dribbling skills to outwit any international defence in the World Cup. A lot will depend on him, as the current French squad is an average set-up with internal problems rife. RibÃ©ry has been recognised on the world stage as one of the best French players of his generation. The previous talisman of Les Bleus, Zinedine Zidane, has called RibÃ©ry the "jewel of French football". 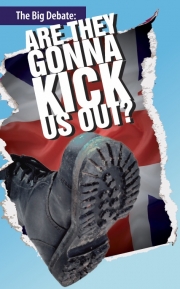 The Big Debate: Are They Gonna Kick Us Out?
Anti-Muslim prejudice is rising across Europe. There are calls for bans on Muslim immigration, bans on the construction of mosques and a ban on women wearing the veil. France has already barred Muslim girls from wearing the hijab in school and Switzerland has banned the construction of minarets. In Britain, the British National Party is gaining greater prominence. It calls Islam a â€œwicked and vicious faithâ€ and its leader, Nick Griffin, is set to become an MP in the next general election. What does all this mean for the millions of Muslims in Britain and Europe. Should we be scared for our future in Britain and Europe? Naheem Zaffar says YES. He argues that Europe is on the brink of repeating the mistakes of history by allowing far-right parties to gain power. Irfan Jalil says NO. He argues that the far-right can only gain power if we fail to engage politically.

The Revival Guide To The World Cup 2010
The Rainbow nation is set to stage the showpiece event in the football calendar with some of the gameâ€™s most dazzling players set to take centre stage. The names of the famous footballers set to star in the forthcoming World Cup in South Africa run off the tip of your tongue: Kaka, Lionel Messi, Wayne Rooney, Michael Ballack, Steven Gerrard, Fernando Torres and Didier Drogba. Talking of African football, the most illustrious footballer to participate in the World Cup, Brazilian Pele, claimed that within ten years an African nation would win the World Cup. That prophecy however has long since been outdated. Flying The Flag For Islam

Salahuddin Ayubi (r.a.)
When Islam faced a massive attack from Crusader Europe, one man united the Muslims and led them to victory over the enemy. Salahuddin Ayubi rescued Jerusalem from the Crusaders and fought off one of the most menacing enemies that Muslims have ever faced. Warrior Jerusalem was important to the Muslims because it contained the Dome of Rock, where Prophet Muhammad (s.a.w) ascended to heaven, and the Masjid al Aqsa. Christians also valued Jerusalem as it contained the church of Jesusâ€™ tomb. In 1095 the Pope urged the Christians to unite and take Jerusalem. Four years later, Christian forces captured Jerusalem and slaughtered Muslims in the process.

Me, My Sister & Anorexia
“I don’t know why you have to be immature about it.” I put my foot in it again. Opened my big mouth. “Don’t you dare call me immature, you don’t understand it’s hard for me.” My sister erupts into a flood of tears and walks out of the room. I sit contemplating. Anyone else would have probably shrugged off the comment or started a slanging match. Even if they felt angry, crying would probably not have been their first reaction. “Alhamdulillah,” I murmur under my breath. Accidentally throwing away the salt of my sister, a depressive anorexic sufferer, and consequently making such a comment was not the best idea, especially as it involved food.

Sky Dive!
If youâ€™re looking to do something daring, exciting, challenging and out of this world this summer... then look no further! Take part in The Revival Sky Dive on 1st August 2010 WHAT? All you have to do is raise Â£400 - and you get a free Sky Dive! You can raise money through sponsorship or donations from family and friends, stalls, sponsored walk/run, etc. The money will cover your jump and the rest will go to The Revival. WHY? It's a chance of a lifetime! Plus itâ€™s for a great cause; the young Muslims of the future! Your fundraising Sky Dive will support The Revival to become bigger and better Inshallah. WHERE?

Guardian Angel - Chapter 3: Light and Shadows
Fifteen years ago a gateway to hell was opened and a plague of evil spread across the land. London was in complete darkness for days and in that time the hordes of hell infiltrated every level of government. Afterwards there was chaos. Against such opposition the Prime Minister became over-whelmed; people were being slaughtered, cities were in flames and in his panic he resigned. A new Prime Minister was elected: Prime Minister Ruban Gadriel and then the world changed forever.

COMPETITION - Win 2 Tickets To Tunisia!
Fly to exotic scenery, golden sands and lively colourful markets and marinas with Jet2.com WIN 2 RETURN FLIGHTS TO TUNISIA COURTESY OF JET2.COM All you have to do is answer the following question: What day do Jet2.com fly to Tunisia from Leeds Bradford Airport? Email your answer to: winners@jet2.com Leave your name and number so we can contact you if youâ€™re picked as the lucky winner! The competition will close on 30th June 2010. The winner will be contacted directly and announced on The Revival Website on 1st July 2010 and in the July issue of The Revival Magazine. Terms & Conditions

Issue 15: What's He Chattin' About?
There are many words we read and hear but arenâ€™t too sure what they mean. The Revival attempts to define some Islamic terms used, or associated with articles, in this issue: Iblis â€“ the personal name of the Devil. He is also called Shaytan or â€œthe enemy of Allahâ€. Jummah â€“ the day of gathering, Friday, and particularly the Jummah prayer which is performed instead of Zuhr by those who attend it. Friday only acquired this name with the coming of Islam, before that it was known as al-Aruba. Kafir â€“ a person who rejects Allah and His Messenger (pbuh).The plural is Kafirun of Kufaar.

Mosques, Imams & The Youth
The Revival has been asking Muslims across the UK about their views on Mosques and Imamsâ€¦ Name: Muhammad Ayas Age: 19 Location: Kettering I think thereâ€™s a lot of guidance out there for us, but itâ€™s a matter of someone leading by example. Yeah, sure you have the Alims who have studied for all these years and are an example to the rest of us, but come on, how much do they really relate to us and the issues and problems we face in a western society? We need role models who have achieved their best in this world without neglecting their Deen and who have been through the ups and downs of life - who can relate to us. Most of the Imams are from back home so they lead the Salaah and thatâ€™s about it
END_OF_DOCUMENT_TOKEN_TO_BE_REPLACED
END_OF_DOCUMENT_TOKEN_TO_BE_REPLACED