Cut The Culture
By Alveena Salim Culture, what exactly is it? Well even though you might think it's got nothing to do with you; you are in fact surrounded by culture all the time â€“ be it the culture of your parents/grandparents or the western 'British' culture. Culture is the outward expressions of your values, beliefs, lifestyle etc. So from that point of view if culture is just basically your way of doing things then Islam can be your culture right? Yep too right it can and so it should be!

Issue 5: Ali Wannabe & Jamal!
By Irfan Khan and Dawud In the Mosque, after a talk has been held, everyone is sitting down to eat, food is being served. Jamal sees Ali and makes a bee line for him and sits across from him. Jamal: As Salaamu alaykum Ali, its a very pleasant surprise to see you here. Ali: W-S Jamal: Huh? Double-you ess? Ali: I said 'Wa Salaam.' And it's good to see you too. Jamal: Aww thanks, really though it's amazing that you're here. Ali: Its nothing, I got a text saying there was food and â€¦ the rest is history. Jamal: Well the important thing is that you're here; just being in a Mosque is a rewardable act. 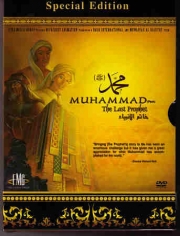 An Idiots Guide To The Prophet Muhammad(Pbuh)
Mohammed is the guy Muslims worship innit? No. Muslims do not worship Muhammad (peace be upon him) or any other prophets. Muslims believe in all prophets including Adam, Noah, Abraham, David, Solomon, Moses and Jesus. Muslims believe that Muhammad(pbuh) was the last of the prophets. They believe that God alone is to be worshipped, not any human being. So then who was he? In brief, Prophet Muhammad (pbuh) was born in Mecca in Arabia in the year 570 AD. His ancestry goes back to Prophet Ishmael, son of Prophet Abraham.. His father died before his birth and his mother died when he was six. He was raised first by a nurse as it was the custom in those days, and then by his grandfather and uncle.

The Revival Guide To The World Cup 2006
The World Cup. Its great innit! We all fool ourselves that our national team is gonna win. We all support the underdog. We all support teams like Nigeria in their matches against European rivals. We all shout ingerluund! ingerluuuund! iinggggerlundddd! But lets face it, we all know Brazil is gonna win. (EDIT - hindsight is 20:20. Just imagine we said Italy!) So what really matters is which players makes a name for themselves, which nations are disgraced (2002: France- no goals!), and which TV Channel has the most viewers! All in the name of footballing glory.

What Role Does Islam Play In Your Life?
The Revival has travelled across the UK to speak to young Muslims about the role of Islam in their everyday lives: NB: Some personals details have been changed or ommitted to ensure anonymity Name: Sara Age: 21 Location: Bolton Islam is my passion. My life revolves around my Islamic commitments, even Uni and work is set around my Islamic timetable. On a weekly basis I attend/lead Islamic circles, manage Islamic websites, organise Islamic programmes and write Islamic articles.

Extremism: Mother of All Beasts
By Irfan Khan Reading, listening or watching the latest news headlines it seems to me that there is always yet another brand that I as a Muslim can fall into. Apart from fundamentalism, terrorism, Islamism (which genius came up with that one?!) etc. I can also fall in to the wider category of 'Moderate' or 'Extremist'. The media has attached so many labels to Muslims that I myself am beginning to wonder what type of Muslim I am. Am I not just a Muslim? Are not all Muslims the same and don't we believe in the same message and read the same Quran?

Is smoking Shisha allowed?
Question: Over the last year about FIVE Shisha restaurants opened in my local town, so is smoking Shisha allowed? Answer by Shaykh Salim Giza In the name of Allah the most Beneficent and Merciful. Smoking Shisha or Huqqa carries a ruling depending upon the ingredients. If the ingredients is only sweet smelling flavoured fruits then the ruling is Makrooh (preferably disliked). If the ingredients have harmful ingredients then the ruling would start at Makrooh Tahrimi (reprehensible) to Haram (forbidden). This depends upon the harm that it may cause the human body. Allah says in the Quran: "And do not throw yourself into destruction with your own hands." (Baqarah 195). Also:

Can you work in a place which sells haram food or alcohol?
Answer by Shaykh Salim Giza In the name of Allah the most Beneficent and Merciful. Working in a place that sells Alcohol or Haram food carries a different ruling depending upon the circumstances. Generally it is Haram for a Muslim to work in a place which sells Alcohol or serves Alcohol in it's premises. The same applies for Haram food as the general ruling is; what is Haram to you is also Haram to others', whether they believe it or not. Our scholars state: "Anything haram to use oneself is haram to give to another." [Ibn Nujaym, al-Ashbah; Majalla]

Issue 5: Turkey Of The Month!
By Naheem Zaffar Hello everybody. Long-time, no see. Many turkeys have managed to escape our grasp in the past few months. Its not really our fault, as we only nominate one person/group per issue. We can't then therefore, berate everyone for their stupidity. Lets see what we have had recently, shall we? We have the infamous caricatures insulting every single Muslim that were printed in a Danish paper. Then we have the Danish PM who refused to even acknowledge that there was a problem. That is until the economy was blind sided by the 'sanctions' imposed by ordinary Muslims who refused to buy Danish products.

Exclusive Danny Williams Interview
By Shah Siddiki The Revival talks to Danny Williams about life as a Muslim, his boxing career and his future plans. Big, powerful and fearless can be three words to describe the current British Boxing heavyweight champion. After knocking out the likes of Iron Mike, Audley Harrison and most recently Matt Skelton, Danny Williams visited Queen Mary's University in East London to discuss Islam and life outside the ring. The talk, hosted at the Mason lecture theatre, turned out to be quite an audience as the big man sat himself down with his title belts gleaming in front of them. Born and raised in Brixton, Williams described how his life revolved around friends who were involved with drugs, gang violence and prison, yet the only time he went to court was for jury service. 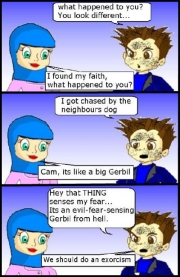