We Refuse To Be Victims!
Since the London attacks we have seen a substantial increase in Faith Hate Crimes reported in the UK. Islamophobic incidents to date have included some of the following: Arson, Bomb hoaxes, Criminal, Damage/Graffiti, Assault, Abuse/Threats

Editorial - Terrorism Has No Religion
The London terror attacks were a nasty piece of work by sick, pathetic, blood-sucking idiots. These attacks were a massive crime against humanity. This was a job carried out by crackpots who have no value for human life. They wanted to kill anyone and everyone- black, white, brown, pink, Muslim, Jew, Christian, Hindu, Sikh, Atheist. These kind of people, and those behind them, need to be caught and punished big time! So â€˜who-dunnitâ€™ is what everyone wants to know. The favourites are always Al-Qaeeda whether it was them or not. It seems that British Muslims were behind these terrorist attacks. And you know what that means donâ€™t ya? Islam and EVERY SINGLE Muslim is put on trial.

Big Brother
By Sajid Iqbal Big Brother, a programme where 13 people chosen from thousands of applicants, are asked to live in a house where there are hidden cameras placed throughout the house covering their every move... and I mean every move if you know what I mean. Every week one guy or girl is evicted by the television viewers, who are given tasks to carry out and then are judged on their success as well as their behaviour, personality and deeds. The successful person at the end of the show is rewarded Â£100,000.

Give Your MP HELL!
By Shaid Ayoub & Sajid Iqbal In this regular section The Revival will argue why you should not just know your MP, be aware of what he or she is actually doing.... but give 'em hell! Itâ€™s YOUR MPs job to represent YOUR views. No MP today can ignore the Muslim voters. So make sure YOUR MP knows what YOUR views are! Now if you keep in contact with your MP and inform them of the issues that concern you, then it could make all the difference in influencing what issues your MP decides to focus on. This is especially true when MPs are entering parliament for the first time.

Muslim Contribution To Britain
When did it all begin? There has been a Muslim presence in Britain for at least 300 years. Yes 300 years! However, migration of Muslims to Britain on a large scale began in the 1950â€™s and ended in the 1970â€™s. It has taken over 30 years for the Muslim community to mature and settle in a Western environment. It was done slowly but surely. Number of Muslims in Britain In 1951 the Muslim population in Britain was about 23,000. Ten years later, it was about 82,000 and by 1971 it was 369,000. 1 At present, there are an estimated 1.8 million Muslims in the UK, making Muslims the largest religious minority in Britain. 2 Number of Muslims growing!

Ali & Jamal
Jamal: [Jamal spots Ali in the street and walks over to him] Salaam bro, how are you? Ali: [Nah man it's him again!] Yeah Iâ€™m buzzinâ€™ Jam. How is you? Jamal: Alhamdulillah, Iâ€™m good. Itâ€™s been a month or so since we had a chat. What you been up to Ali? Ali: Iâ€™ve been flexinâ€™, chillin and dat. Jamal: Did you give any thought to what we spoke about last time Ali? Ali: Mmm... Yeah, yeah I have been thinking about it and I know your right but... Jamal: Mashallah. So you ainâ€™t gonna sell drugs anymore? Ali: Woah woah easy bro... no need to chat like dat, some uncle might hears you and grass me up to me old man innit. You gets me?

Islam Says 'NO' To Terrorism
By Sajid Iqbal After the terrible terrorist attacks in London, everyone is pointing the finger at Islam and Muslims. So does Islam promote violence? Does Islam support terrorism? Is Islam a religion of extremists and fanatics? The following traditions of Prophet Muhammad, upon him be peace, will clarify that Islam is a faith that promotes peace and harmony and one that is against violence: â€˜A perfect Muslim is one from whose tongue and hands mankind is safe.â€™

Drugs: Weapon Of Mass Destruction!
The biggest Weapon of Mass Destruction (WMD) today is drugs. The most popular and easily available drug for youngsters today is cannabis, you might know it as "weed", â€œgrass", "pot", "reefer", "joint", "hashish", "Mary Jane", â€œpuffâ€, â€œskunkâ€ and â€œwacky backyâ€. The Revival takes you on a journey in the life cycle of a joint. We have spoken to people who are involved and affected by drugs. The following are real life accounts of real people and they reflect the views of many people in similar situations.

Do You REALLY Know Him?
One is the best crosser of a football in the world today. One is the most influential man in history. One shows no mercy in a dead ball situation. One is a mercy to all of mankind. One is recognised as a famous celebrity in the world today. One is recognised as the greatest leader in world history. One has thousands of adoring fans. One has almost 2 billion followers today who follow his every practice and teaching. The 60 million dollar question is: Who do you REALLY know? Whose life story have you read? Whose life do you follow? Who do you imitate? Who inspires you? Whoâ€™s your role model?

Turkey(s) Of The Month!
This months honourable award goes to EXTREMIST, RADICAL AND FANATICAL so-called scholars and Imams. Individuals who brainwash young naive Muslims and promote hatred and violence. So-called scholars who have a misguided and fanatical understanding of Islam. Imams who turn innocent young peaceful Muslims into extremists, fanatics and even terrorists. Those who have an incorrect and dangerous understanding of Jihad. Those Mullahs who believe killing non Muslim civilians through bomb blasts, suicide bombings is Jihad.

F.R.I.E.N.D.S
By Alveena Salim Have you ever actually sat down and thought about the people you hang around with (your bredrins!)? Who are they? Are they alcoholics, drug dealers/addicts, wannabe Gâ€™s, playaâ€™s? Do they regularly go clubbing? Are they involved in dodgy scams? Do they have lots of girls/boys on the line? Do they treat their parents like crap? Are they regularly involved in fights? Are they dodgy geezers? You might be thinking â€œWho cares what theyâ€™re on or what they get up to- that donâ€™t matter! We have a laugh when we get togetherâ€.

I'm a single Muslim girl. Is it allowed for me to trim, shape or pluck my eyebrows?
Shaykh Muhammad Salim Ghisa is a prominent young scholar in the UK. He has studied Islam in India, UK and Jordan. The problem of living in the West is to try and keep up with the Western phenomena and this is done whether it means its Haram or Halal. We find sisters with perfectly formed eyebrows wanting to reshape them so that they will be part of the picture. According to the Shariah (Islamic Law) it is not permissible for a Muslim girl to pluck, trim or shape her eyebrows as this is against the natural beauty that Allah(swt) has given to her.

How Can Reading Salaah/Namaaz Help Us In This World?
Shaykh Muhammad Salim Ghisa is a prominent young scholar in the UK. He has studied Islam in India, UK and Jordan. After submission to the faith of Islam, Salaah is the most important form of worship for the believers. The purpose behind the Salaah is to remember the creator within regular intervals during the day. This will lead to a believer putting his/her full trust in Allah for all their day to day necessities. There are many Hadith advising the believers of the true benefits of Salaah and the beauty it holds for both this world and the hereafter. 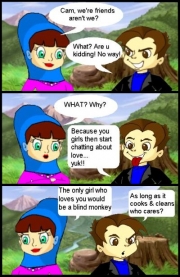