It seems like it was just yesterday when we last had a general election, and here we are with a new one on our doorsteps.

This time, it seems the Conservatives have a runaway lead and nothing will stop him. Which, well is pretty similar to last time.

However one difference this time is that many mainstream media outlets do not seem to be following the usual "purdah" rules for impartiality. If you look at political editors for the BBC and ITV, you will notice a whiff of... something.

It cannot be denied that Boris Johnson is a formidable opponent/politician. Mostly because unlike most, he seems to have absolutely no scruples and there probably isn't anyone who he hasnt lied to or betrayed so far.

Yet many people expect him to for the first time in his career keep his word and not betray them.

He says with not even a straight face that there won't be a border down the Irish see.

The Lib Dems. The party that used to have a conscience. Back when Charles Kennedy was leader.

Right now their policies and attack lines seem to predicate on Brexit - and it happening. If Brexit is prevented via referendum by the Labour party, they have no reason to exist. If you do have Brexit, they have a reason to exist and the worse the deal is for us, the more they can shout.

It should not be forgotten that during the Brexit referendum they were mostly silent and before then progressively eurosceptic.

A lot of people will base their vote on this. It is unfortunate that so many people have been brainwashed and we deserver whatever we get.

I personally have no real issue with brexit - my real concerns before the referendum was how it would empower racists. that has already happened.

It will damage our economy and many of those that vote(d) for it will suffer more than others that didn't.

War against the people

For the past few years a media war has been waged against the people with such viciousness, many of the lies so common that.

People actually think it is reasonable for a party that has caused the rise of foodbanks, of poverty, of homelessness, over an estimated over 120,000 extra deaths due to their policies.

They think it is acceptable to vote for a party that presided over the windrush saga - which btw did not just impact people from Jamaica, but people from most former British colonies who arrived in the UK in the 50s and 60's. The full impact of this is still hidden from the people.

The media have not done their job and hold a candle to show the truth. Instead they have been complicit.

Recent governments have been disastrous for the average UK citizen (and the Labour government under Tony Blair was disastrous for Iraq and the wider world too), but we have an opportunity to vote for a candidate that will hopefully lead towards a fairer world.

Many people hate him, mostly based on what others have told them. We are human and normally value other people's input so this is expected, however it has been used to distort what he has been about.

Corbyn is not perfect - he has huge flaws, such as being too passive on issues such as Syria, however when it comes to potential leaders, it is IMO better to have one that thinks twice before going to war instead of one who could launch one for the sake of popularity or profit.

His policies are not extreme or ultra leftist - they are mostly middle of the road policies practices elsewhere in other parts of Europe.

The conservatives have been disastrous to many segements of society and have caused a huge divide in the UK, but that is to their benefit. Divide and conquer works for them, but not for us.

The opinion polls give the conservative party a massive lead. However there is an anomaly hiding in this. I have covered this previously in The Secrets of Electoral Opinion polls, but this needs to be covered a lot more.

But this is the opinion poll result after it has gone though analysis and various weightin applied to the replies. A few days ago, one of the opinion polling companies weighting was allegedly leaked.

Poll Weighting for Kantor ahead of 2019 UK General Election 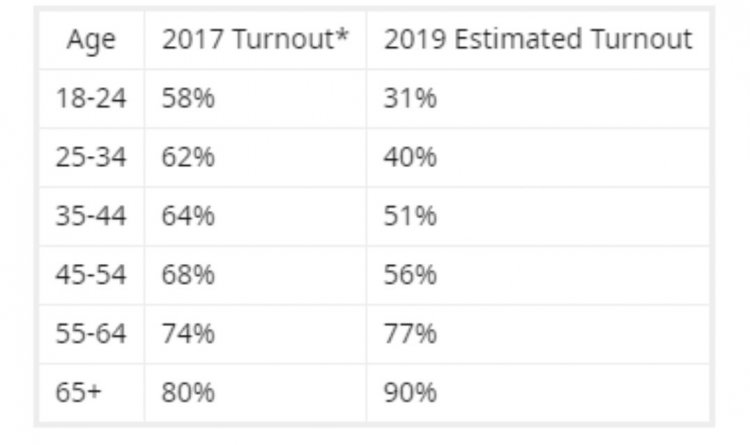 Poll Weighting for Kantor ahead of 2019 UK General Election
What does this show?

It shows the weighting applied to each group. For simplicity's sake I will use the figures for groups aged 18-24 and 65+

In an opinion poll of 10 people from each category, if 8 under 24's choose Labour (2 conservative) and from the over 65's 8 choose the Conservatives with 2 choosing Labour, how would this result be computed?

Both have 10 votes. However after weighting, Labour will be on 4.28 and the Tories will be on 7.82. The conservatives suddenly have a massive lead despite the raw polling figures being identical.

Is this fraudulent? Not necessarily. Experience has shown that more older people vote than younger people, so weighting responses accordingly could lead to more accurate polling. On the other hand, the figures used for weighting in this chart seem to be exceedingly low and that leads to a massive drop in Labour support.

Unfortunately some people will only vote if they feel they will be voting for the winner, so such polls do manipulate public sentiment.

Alternatively, the solution is in my previous post on the secrets of polling: If more people from groups that support you come out to vote, you have a better chance of winning.

So, whilst it is harder this time than in 2017 where the hung parliament was a huge surprise, it is once again possible to stop Boris getting a majority and maybe even preventing him from continuing to be PM (until the Lib Dems decide to bale them out again).

If you don't and future policies target you or those around you, don't blame anyone else. It will be your fault.