"This is surely to be one of the best upcoming if not the best course in London for the year 2012. Alhamdulillah by the Mercy of Allah, our beloved Shaykh and Speaker Shaykh Zahir Mahmood has agreed to do this monumental course on the life of the noble companion, Umar (ra). This indeed is the start of the Sahaba Series which will eventually see the whole of the Khulafa Rashidun and other notable companions taught. With a pack of over 100 pages taught by one of the best speakers of our time, this is a course not to be missed."
Zayd ul Islam, Al Buruj Press Director

A Monumental 3 DAY COURSE delivered by Shaykh
ZAHIR MAHMOOD for the 1st TIME Exclusively in LONDON!

ENROL NOW TO CONFIRM YOUR SEAT BEFORE IT’S TOO LATE!

The study of the life of Umar b. Khattab is not just the life of a great personality. It is one of the greatest examples of the manifestation of divine guidance. A man whose enmity for Islam was so great, that it was believed his father’s donkey had a greater chance of becoming a Muslim than him. However, when guided by Islam, Umar became the man regarding whom the Prophet peace be upon him said, “If there was a Prophet to come after me it would have been Umar b. Khattab (ra)” (Tirmidhi)

How much do you know about Umar? This course will take you on a journey into the life of Umar, may Allah be pleased with him, from his birth, youth, adulthood, disbelief and enmity towards Islam to immense belief and piety, culminating in many of his glorious achievements.

From Sahih Al-Bukhari, the Prophet (sas) said: "There were among those who came before you individuals spoken to. If anyone among my nation is one of these, it is surely Umar."

Those "spoken to" means individuals who, while not prophets, receive inspirations which match or foretell the actual Communication from Allah received by the prophet of their time.

Abu Dharr reported that he heard Muhammad say, "Allah has placed Truth on Umar's tongue and he speaks only the truth." From Abu Dawud

(Free Accommodation Provided for
Brothers traveling from outside London)

What will you learn from this Course?

Enrol on to the Sahaba Series and have the opportunity to study the life of the Greatest Companion of the Prophet (pbuh)
Journey into the life of Umar (ra) through the esteemed guidance of Shaykh Zahir Mahmood
Study in detail the Characteristics, Role, Caliphate, Elevation and more of Umar (ra)
Receive an in-depth course folder as your point of reference for the entire course.
Boost your faith by delving into the life of the greatest companion, and from this follow on with us to other great companions such as Umar (ra).

Who is this Course for?

Every Muslim Male and Female
This is a great opportunity to learn the life of Umar (ra) in a unique and elegant manner.
For anyone wanting to study the life of the companions, join us in a epic journey through the Sahaba Series with this being the first.
Anyone working/ studying/ unemployed this is a perfect course of true inspiration.
Muslim and Non-Muslim

This course will be taught by Shaykh Zahir Mahmood

You should make notes, then type them up here

Errr i'll make notes insha Allah. I was hoping Billz would come so she could make notes for me

i mean for the site. She's much better at explaining things than i am.

Oh and if anyone wants to come from outside London, there's free accommodation (don't worry i won't be there)

Foysol89 wrote:
Errr i'll make notes insha Allah. I was hoping Billz would come so she could make notes for me

i mean for the site. She's much better at explaining things than i am.

Oh and if anyone wants to come from outside London, there's free accommodation (don't worry i won't be there)

Can't wait...starts tomorrow insha Allah from 6:30pm till 9pm and then Sat and Sun from 9AM to 7PM

After that talk on Khalid Bin Walid last week i'm really fired up for this one...subhanallah i heard it's fully booked allready but they may relocate if they need a bigger place for extra people.

We've been told we'll be recieving a huge ...ringbinder file thingy full of notes and maps regarding the whole life of Umar RA

so i won't need to write so much notes myself.

First time he's delivering it in London but next time im going to Brummyland if he's doing it there. Insha Allah.

EVENT SOLD OUT! E-MAIL TO BE PUT ON WAITING LIST!

only reason me and billz havent jumped on this is coz of exams. and moneys...

Lilly wrote:
only reason me and billz havent jumped on this is coz of exams. and moneys...

SUBHANALLAH! That was an amazing weekend and an amazing course alhamdulillah...May Allah reward Shk Zahir Mahmood and enabke him to carry on this work. Ameen.

Subhanallah, an enlightening weekend...but now it's over

unless i carry on spreading the knowledge and implementing what i have learnt. Right now though...i'm tired.

Can't wait for the next one insha Allah. 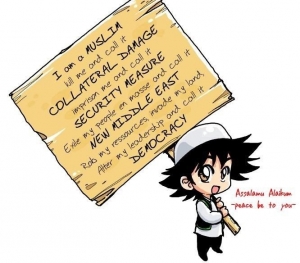